After the disaster, the municipal government of Lishui City urgently launched a special I-level response plan for geological disasters, and set up an emergency rescue headquarters to conduct rescue and relief work. 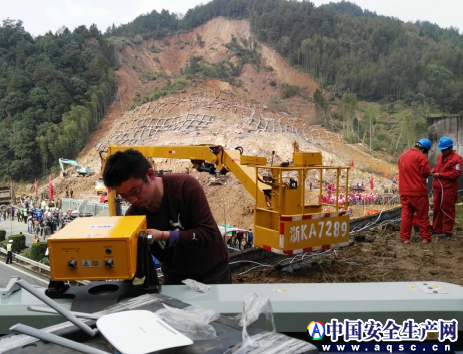 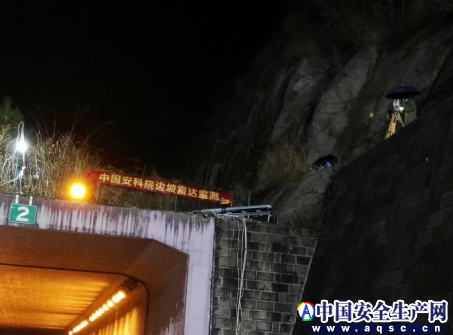 In order to avoid secondary landslide disasters during disaster relief and to ensure the safety of rescue workers, the Zhejiang Provincial Government, Zhejiang Provincial Safety Supervision Bureau and other department leaders requested that the on-site emergency rescue headquarters urgently recruit the China Academy of Safety and Production Sciences ("China Security") The S-SAR Slope Synthetic Aperture Radar Monitoring and Early Warning System (referred to as â€œSlope Radarâ€) independently developed by the Academy of Sciences is used for on-site emergency safety assurance and provides real-time monitoring data of landslide displacement to the command.

China Academy of Science and Technology immediately responded by urgently arranging four researchers to form an expert group to speed up the disaster-stricken area within 12 hours of the disaster, and to transport the S-SAR-type slope radar of the project in Dongchuan, Yunnan, to the disaster relief site.

The new landslide body was produced around 3:00 am today, with a surface of 900 square meters, a height of more than 10 meters and a volume of more than 10,000 square meters. The radar system timely forecasted landslides and evacuated personnel from hazardous areas. The rescue plan was redefined at the expert group meeting at 8:00 this morning. The S-SAR system is the â€œfour batchesâ€ of the State Administration of Work Safety and the key R&D equipment in the field of safety production in the National Science and Technology Support Program. The China Academy of Science and Technology is in charge of independent research and development of core technologies. The system is based on ground-based synthetic aperture radar differential interferometry technology, with a maximum range of 5km and an accuracy of 0.1mm. It can be used for landslides, open pit slopes, dump slopes, tailings dam slopes, hydropower bank and The dam body slope and the deformation of large-scale construction and construction buildings are widely monitored continuously, which can be widely used for important engineering safety assurance, health assessment and emergency rescue, and forecast and forecast various collapse disasters.

On the afternoon of November 14, the early monitoring personnel arrived at the scene to complete the landslide survey, radar station selection, site leveling, parameter selection, program development, power supply and other work; at 4 am on the 15th, all components of the slope radar system arrived. At the observation site, at 9 am, the slope radar system was hoisted to the designated location and assembled. At 10 o'clock in the morning, the installation and commissioning of the slope radar was completed, and the landslide disaster began to be monitored in real time.

At present, the system equipment works stably and reliably, and the displacement data of the on-site monitoring surface can be collected in real time, and a set of data is updated every 10 minutes. A monitoring and early warning report will be submitted to the headquarters every 6 hours to ensure the safe operation of the rescue work. As of 6 am on the 17th, the slope radar monitoring expert group has reported the landslide monitoring report to the disaster relief headquarters 8 times and issued an alarm message once. At the same time, the headquarters timely adopted the recommendations of the expert group to install early warning broadcasts, carry out emergency drills, increase landslide observation whistle, and reasonably arrange the number of on-site rescue observers.

At about 3:30 in the morning of November 17, after experiencing 30 hours of intermittent rainfall, all indicators of radar monitoring showed that the landslide began to resurrect and the activities were frequent. The monitoring expert group reported to the duty commander in time. , landslide warnings, evacuation of personnel in all hazardous areas.

Our Graphite Electrode was made of high-quality petroleum coke, needle coke, coal tar pitch and other low-ash raw materials. Processing by calcining, ingredients, mixed kneading, molding, roasting and pressure impregnation at 3000 â„ƒ  high temperature graphite. We offers the most demanded standard graphite electrodes and nipples. Our graphite electrodes include RP, HP and UHP grades. They are widely used in electric arc furnaces (EAF) and ladle furnaces (LF) for the melting of steel, non-ferrous metals and some non-metallic minerals.